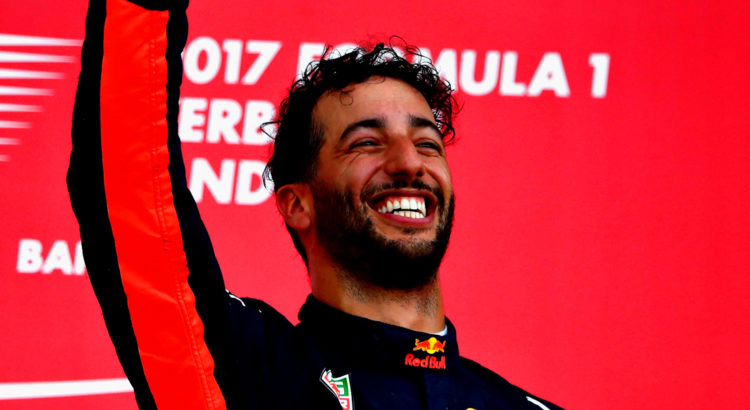 Many had feared that the Grand Prix in Baku would be as boring as last year. But this race offered everything from team-internal battles to a race break. In case you missed the 2017 Azerbaijan Grand Prix we highly recommend to watch the race repetition.

Already at the start both Finns, Valtteri Bottas and Kimi Räikkönen (Scuderia Ferrari), crashed in the second corner which caused a puncture on Bottas’ car. He made it to the pits but was already one lap behind when he left exactly those. During the safety car phase, he was allowed to lap himself back. “I did not have any place, I had to drive over the curbs, and then the car lifts. I’d say it was a race accident,” Bottas defends himself.

The safety car was deployed for the first time after Daniil Kvyat had to stop his car on track in round 12 and led to drivers complaining about a too slow safety car. The second safety car phase took place because of Kimi Räikkönen’s debris in turn 1, followed by a third phase in round 20 due to the crash of both Force India drivers. In the end of the day, the Stewards decided to red flag the race due to too much debris on the track.

It’s hard to sum up your feelings after such a busy race. I’m happy with our performance and also disappointed not to realise the potential we had today. It’s never nice to have an incident with your teammate and it was costly for both of us – we both lost a lot of time and positions. Fortunately I could recover, overtake a lot of cars and score some important points for the team. We will discuss things internally and see what happened, but when you are racing close to each other at a restart these things can happen sometimes. Sergio was very deep into turn one at the restart and I went on his inside. He squeezed me between turns one and two, and I was on the inside going into turn two. He was trying to resist on the outside of the corner and we touched. We need to review it together and understand more. For sure it should not happen again in the future.

It’s a shame to retire from a race like this because I think we would have been in a position to win the race. The team did a great job all weekend and deserved much more than to have a race ruined in these circumstances. I couldn’t do anything to avoid the accident and it’s particularly bad for our team because it ruined the races of both of us on a day in which other teams have scored big points. We will need to discuss the situation within the team and make sure something like this does not happen again. As drivers, we are just part of a much bigger team and we have a responsibility to do our best to bring home a good result, especially considering what would have been possible today. Before the incident, it had been a great race and a strong weekend. My start was very good and I was fighting for second place on merit, but we were really unlucky at the Safety Car restart. Even after the crash, the team did a great job to get the car back together and allow me to resume the race. Even then, the seat broke and the team retired the car on safety grounds. It shows how unlucky this weekend turned out to be.

LAP 21/51: And further down the road, after the restart, both Force Indias collide

But the most discussed scene of this race remains the incident between the title rivals Hamilton and Vettel.

“He brake-tested me. What the fuck is going on?” an angry Vettel exclaimed. While Hamilton pointed out the German had side-swiped him. “Vettel has literally just turned into me and hit me,” he said. The Stewards penalized Vettel with a 10-seconds-stop-and-go. The German was surprised that only he got a penalty as in his opinion Hamilton’s move was safe as well. Already during the race, Hamilton said that this penalty was not hard enough for such kind of behaviour.

Those are the reactions of both drivers:

Even after that incident it looked like Lewis Hamilton is going to win the race, but suddenly his headrest became loose. At first, he tried to lock it on his own with one hand while driving 340 km/h, but the FIA told him to stop in order to fix that problem.

LAP 32/51: HAM comes into the pits to have his headrest replaced

After that unplanned stop, Hamilton joined the race on P8 right behind Sebastian Vettel. The Brit was closing the gap lap by lap, but could not get passed Vettel anymore.

Lance Stroll’s performance had to be highlighted as well. The Canadian drove a very good race on P2 for quite a long time but got overtaken by Valtteri Bottas just before the Finish line. “It has to be one of the thightest results ever!”, the Canadian said afterward. At the end of the day, he finished on P3 and became the youngest rookie to score a Formula One podium and “Driver of the Day”. On the podium, he had to drink champagne out of Ricciardo’s famous shoey to celebrate this achievement.

Lance on a special moment, and a special race#AzerbaijanGP #F1 #LS18 pic.twitter.com/6oUxApazgr

Next to Lance Stroll and Valtteri Bottas, Ricciardo was the one who surprisingly got on that top step of the podium. The Australian started ninth, then he had to box because of debris in his brakes which led him leaving the pits on P17. He stayed out of trouble and had a great maneuver during the restart, where he was able to overtake both Williams.

Ricciardo’s teammate Max Verstappen was not able to finish the race due to engine problems.

Furthermore, Fernando Alonso was finally able to score the first points of the season as he finished on P9 and is sure that McLaren-Honda missed out an opportunity to win today’s race.

Starting 19th because of our penalties, on one of our least competitive circuits, yet still scoring our first championship points is unreal; a complete surprise. The race really came to us through the many retirements and a lot of action. I managed to stay away from the walls, just brushing them here and there. Nevertheless, I think we could have fought for a podium finish today – and perhaps even the victory. We were behind Daniel Ricciardo during the first Safety Car period; then Lewis had a problem with his headrest and was forced to pit; Sebastian had a penalty; Kimi (briefly) retired; the two Force Indias touched each other, so we automatically found ourselves in a decent position. We missed out on further opportunities because we weren’t quick enough in the race and couldn’t hold on to that position. Still, we got our first two points of the season today, so let’s just take that.

This Grand Prix’ offered many more topics to talk about. Except for the two Force Indias, two more team duels were held. The first one between Carlos Sainz and his teammate Daniil Kvyat, who had to take the emergency exit at turn 1 and irritate the Spaniard with the way how he went back on track. Sainz spun and nearly crashed into the barriers.

The other battle was Pascal Wehrlein against Marcus Ericsson, who risked one additional point for Sauber as they crashed into each other.