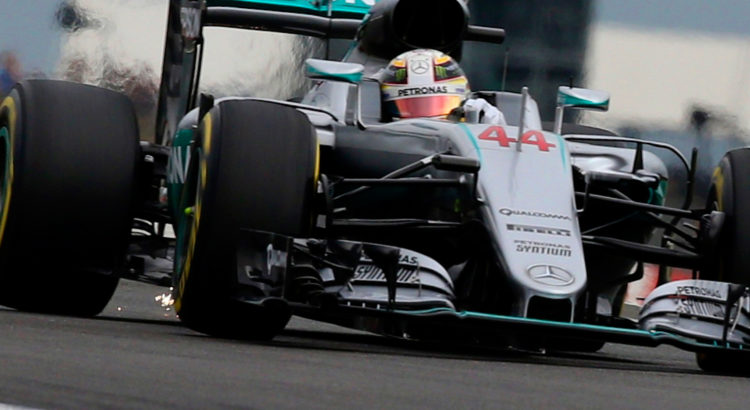 Lewis Hamilton outclasses the competition and secures the 67th pole of his career. The FIA was investigating an incident between the Brit and Haas’ Roman Grosjean but decided not to penalize the Mercedes driver. (Photo source: T-Online.de)

In the British Grand Prix qualifications, the Brit scored a time of 1:26:600. Both Ferrari drivers weren’t able to follow this pace and qualified respectively on P2 (Kimi Räikkönen, +0.547) and P3 (Sebastian Vettel, +0.756). Nevertheless, Hamilton had to wait until the FIA finishes the investigation against him, which was caused by blocking Romain Grosjean at Club Corner. The French finished on P10 and according to him and his team, he has lost three-tenths of a second due to that incident.

The stewards decided against a punishment and frustrated Romain Grosjean suggested that championship biased saved Lewis Hamilton’s pole position.”If a driver loses 0.350 seconds in a turn, I do not know what else can be seen as a handicap.” says the Haas driver.

Mercedes team principal Toto Wolff immediately answered Grosjean’s accusations. In his opinion, there are always “those who complain and keep on complaining. I do not even want to comment on Romain Grosjean demanding penalties for other and if he looks at his own “successes” he should be glad that he is driving in Formula One at all.” In this case, Wolff is reminding on Grosjean’s aggressive driving style back in 2012, where the French got locked for one race.

Vettel was unhappy with his qualifying performance and says that they could have done more in Q3. This morning was really good. “There was more there for us in Q3 but we couldn’t quite extract it.”, the German said during the interview on the main straight right after the session. Nevertheless, he was able to keep Valtteri Bottas behind, but it was again very tight between both of them. Kimi Räikkönen confirms that Ferrari has a good car, but “not quite fast enough for 1st place.”

Generous words from Sebastian Vettel on his title rival

And "overall it's been a very good day"#BritishGP 🇬🇧 pic.twitter.com/KFtUWhq0pD

Ricciardo’s qualification finished very soon as he had to stop his car ten minutes before the end of the first section. The reason for this unplanned stop was a drive defect on his Red Bull. “I lost power, then I’ve heard strange turbo noises and suddenly everything went down. It’s a pitty because under those conditions we could have had good chances.” His stop caused a red flag for a few minutes.

Nico Hülkenberg took advantage of the rainy conditions and qualified sixth ahead of both Force India drivers. “I had a good harmony in the car, I was the boss in the car. It’s always good when it is like this and not the other way around.” The German is profiting from the penalty against Bottas and will start from P5.

Of course, we want to highlight Alonso’s Q1 performance. The Spaniard switched late on super soft tyres and crossed the finish line just before the chequered flag. Already during his run, the Spaniard told his box that they have been in time for another run and qualified P1 ahead of Max Verstappen and Lewis Hamilton. At the end of the day, he finished the session on P13 and got out-qualified by his teammate Vandoorne for the first time this season. “I saw people in the grandstand excited. It was only P1 in Q1 but they obviously loved seeing McLaren on top. Even if it’s just for one moment, to be up there at the top of the time sheets feels good.”, said the Spanish driver.

"Listen to the cheers around Silverstone…"

F1 fans went crazy as @alo_oficial topped the timesheets in Q1 at the #BritishGP 🇬🇧 pic.twitter.com/Wi6RxvIwi8

See the full results below: